The IAA mobilizes the advertising, media and entertainment industry to raise its voice for change

In a pioneering initiative, the India Chapter of the International Advertising Association (IAA) organized a Change Summit titled Voice of Change: Gender Representation from 30 seconds to 3 hours, where the important conversation on gender parity, as seen in the media, was featured in a day of discussions, debates and research findings. The IAA began the journey last year with a research study in partnership with UNICEF, conducted by the Geena Davis Institute on gender representation in advertising. Drawing on the facts presented in the study, the industry body set out to initiate tangible change through the dialogue needed to drive gender awareness among those leading content creation and marketing. in India.

Kick off the event, Nina Elavia Jaipuria, Chairwoman of IAA Women Empowerment Committee and Head of Hindi Mass Entertainment and Kids TV Network, Viacom18said “Voice of Change highlights the need for more conscious and inclusive storytelling in content and all of the creative minds here – content creators, brand stewards and students are driving the creation and marketing of this content now and in the years to come. The IAA has intensified and brought all of this learning and more to the public eye and today, through this summit, assumes the essential role of not only educating and informing, but also to enable effective change. 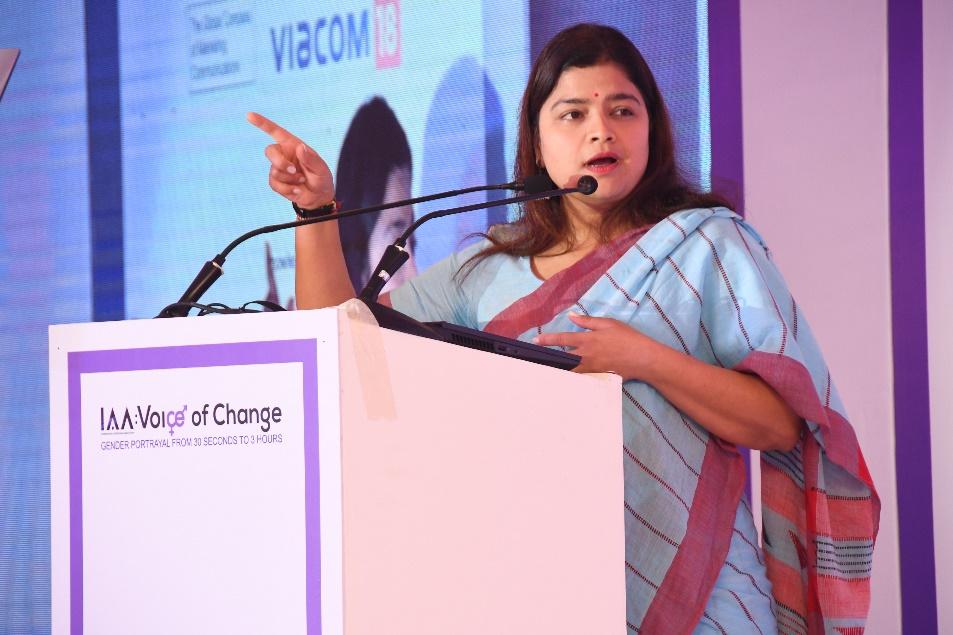 The learning day began with a compelling address from the Honorable Chief Guest Smt. Poonam Mahajan, MP for North Central Mumbai. She told a full house her story, evoking her journey where at each step she has, in a very organic way, broken stereotypes and is where she is today. From pilot to Member of Parliament, she has met challenges head-on and proven herself. His inspiring words were followed by a keynote address by esteemed academician Dr Ranjana Kumari, Director of the Center for Social Research and a special address by Arjan De Wagt, Officer in Charge – Deputy Representative Programs – UNICEF India where he said, “For UNICEF, gender equity is an essential and fundamental agenda for all the work that UNICEF does around the world. Raising the value of girls is vital for societies to thrive and this must happen throughout their life cycle. When a woman is pregnant, when a girl is born, when she grows up…does she receive adequate nutrition, does she have an equal opportunity to go to school, does she have access to basic health care and is she qualified and self-sufficient. As a society, we must collectively ask ourselves these questions and take action to change the norms that create gender inequalities. » 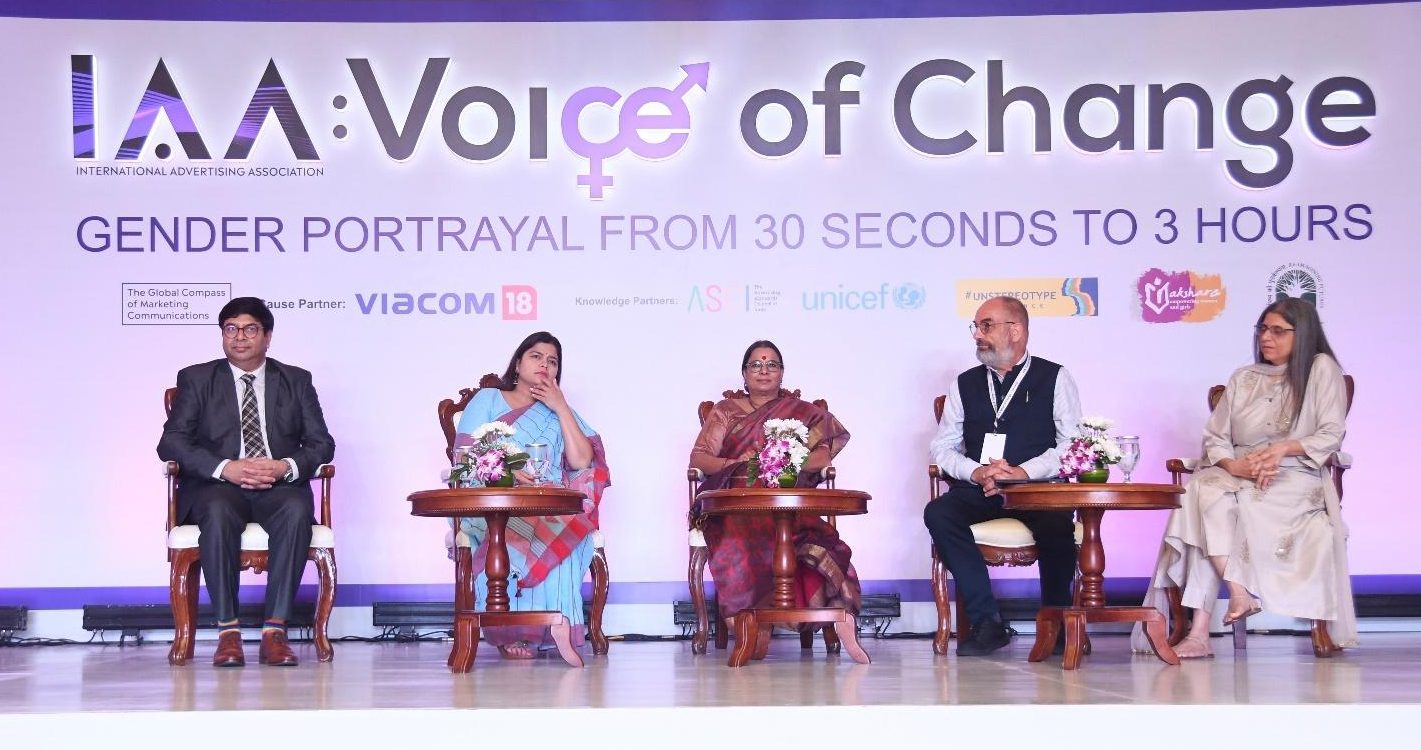 The first segment of the day culminated in congratulating Gender Warriors – Shambhu V Sista, a publicity legend popularly known as Bobby Sista; Guneet Monga, a luminary in the world of cinema; and Ramesh Narayan, another decorated advertising industry veteran. The three Gender Warriors have championed the cause of equality and fair representation in their fields through pioneering work and a commitment to making the world a more equal place. 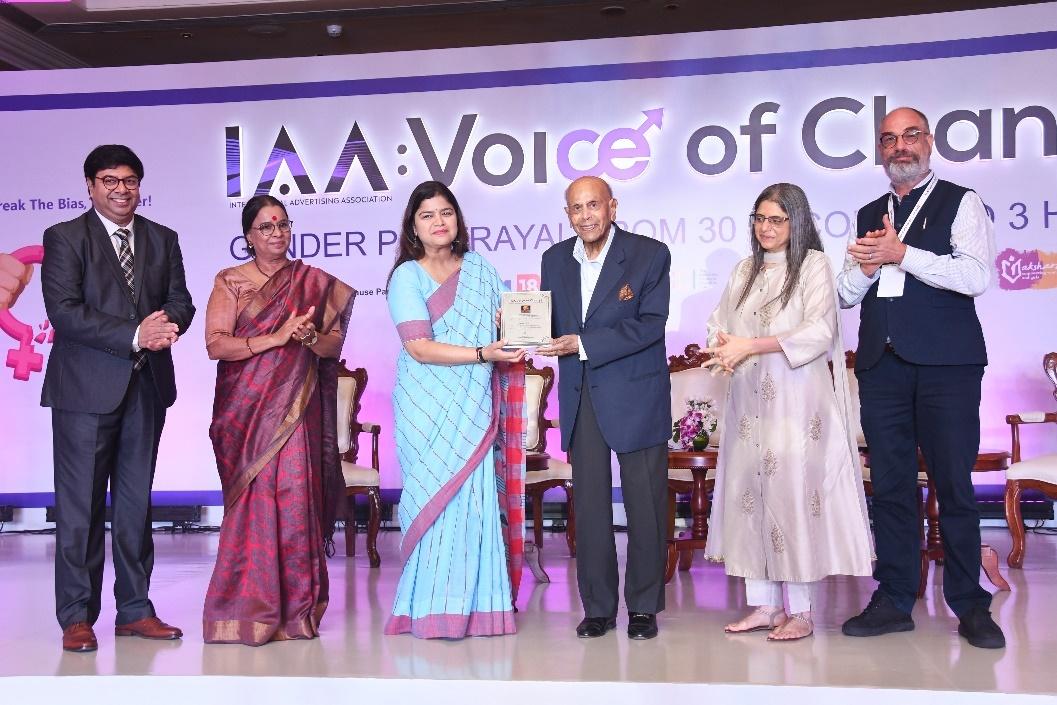 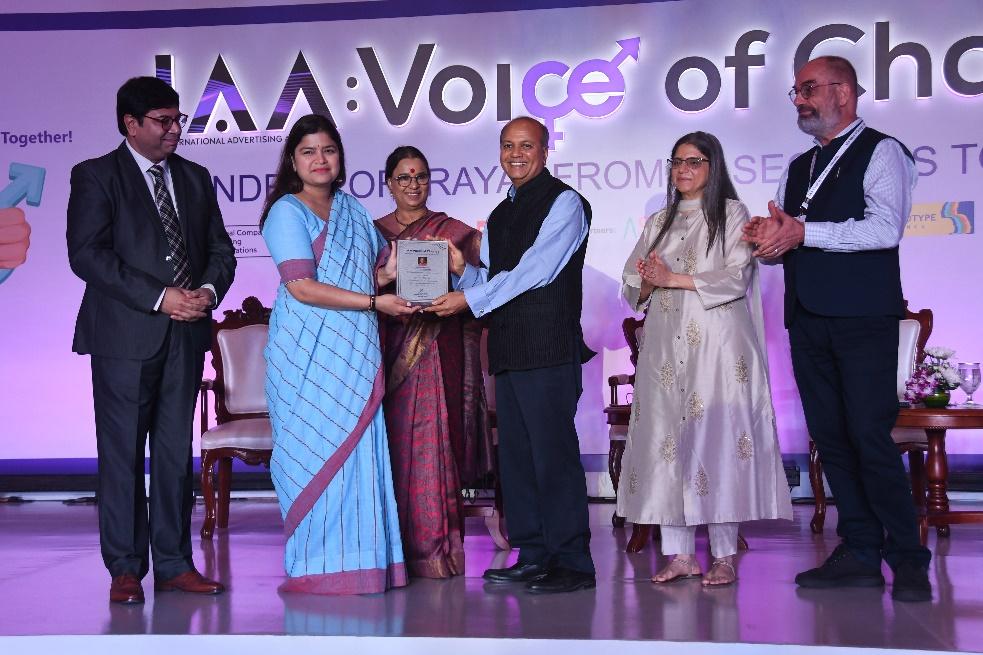 The day was moderated by a session by Manisha Kapoor, CEO and Secretary General of the Advertising Standard Council of India (ASCI), who discussed the GenderNext report entitled Follow Her Lead – GenderNext: A Study on Portrayal of Women in Advertising with Knowledge partners ASCI. The report and resulting frameworks provide an important tool for the industry to improve the representation of women in advertising. Then there was an interesting talk by Santosh Desai, MD – Futurebrands Consulting, who talked about the cultural perspective of gender representation. Next in this segment was Prasun Basu, Head of Growth and Digital Transformation – Kantar, who moderated a session on the business case for progressive gender representation in advertising. 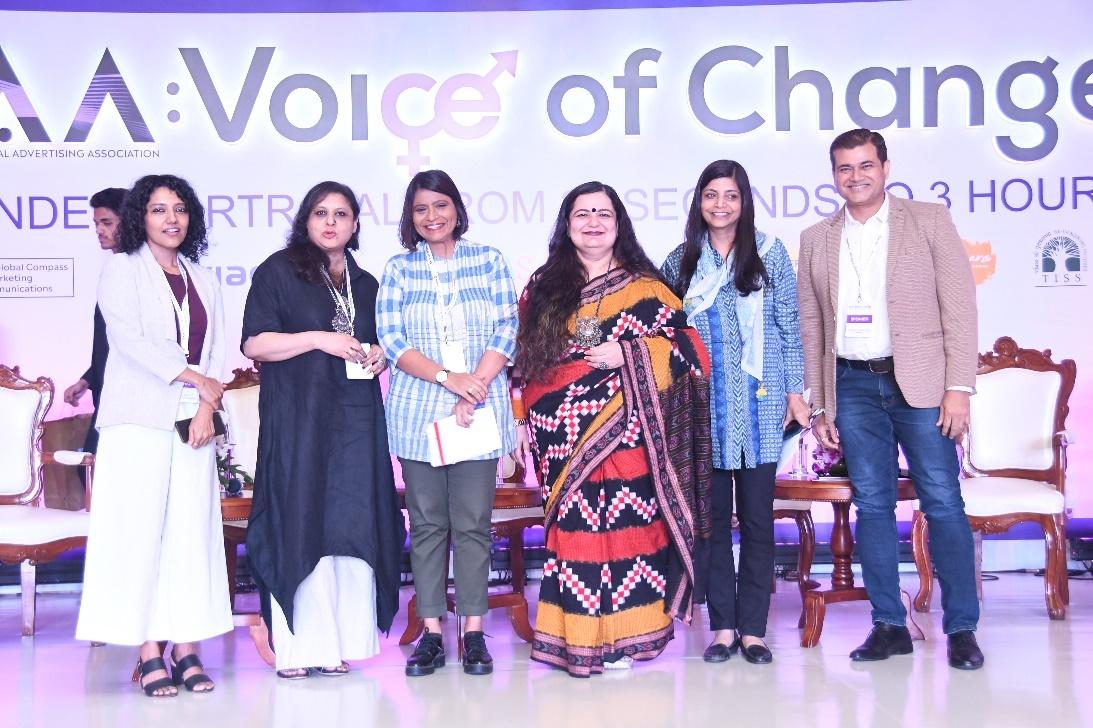 The summit’s post-lunch segment addressed gender-conscious creativity in film and OTT, beginning with a meaningful session from Dr. Nandita Gandhi, Director of the Akshara Center, who showcased her efforts under the Gaana Initiative. Rewrite, with a fantastic performance by Shefali. Saxena who sang the gendered versions of popular songs. The next session was moderated by Distinguished Academician Dr. Lakshmi Lingam Dean & Professor, School of Media and Cultural Studies, Tata Institute of Social Sciences (TISS), on the topic Screening Women: Mapping Gender and Work in Hindi Cinema which brought in valuable insights like what kind of roles women have been seen in, the portrayal of LGBTQIA+ characters, and the fact that female crew members on set often don’t even have access to restrooms.

The second roundtable of the day, moderated by renowned author, journalist and film critic Anupama Chopra, brought together actor, director, producer and advocate for social change Nandita Das; Monika Shergill, VP Content, Netflix India; national award-winning director and producer Aniruddha Roy Chowdhury; and national award-winning filmmaker and journalist, Dr. Vibha Bakshi. The conversation was an enlightening exchange on the chicken and egg situation between the content economy and its ethics. As the needle moves and platforms and media players focus on greater inclusion, it is important that the whole ecosystem comes together and does its part. 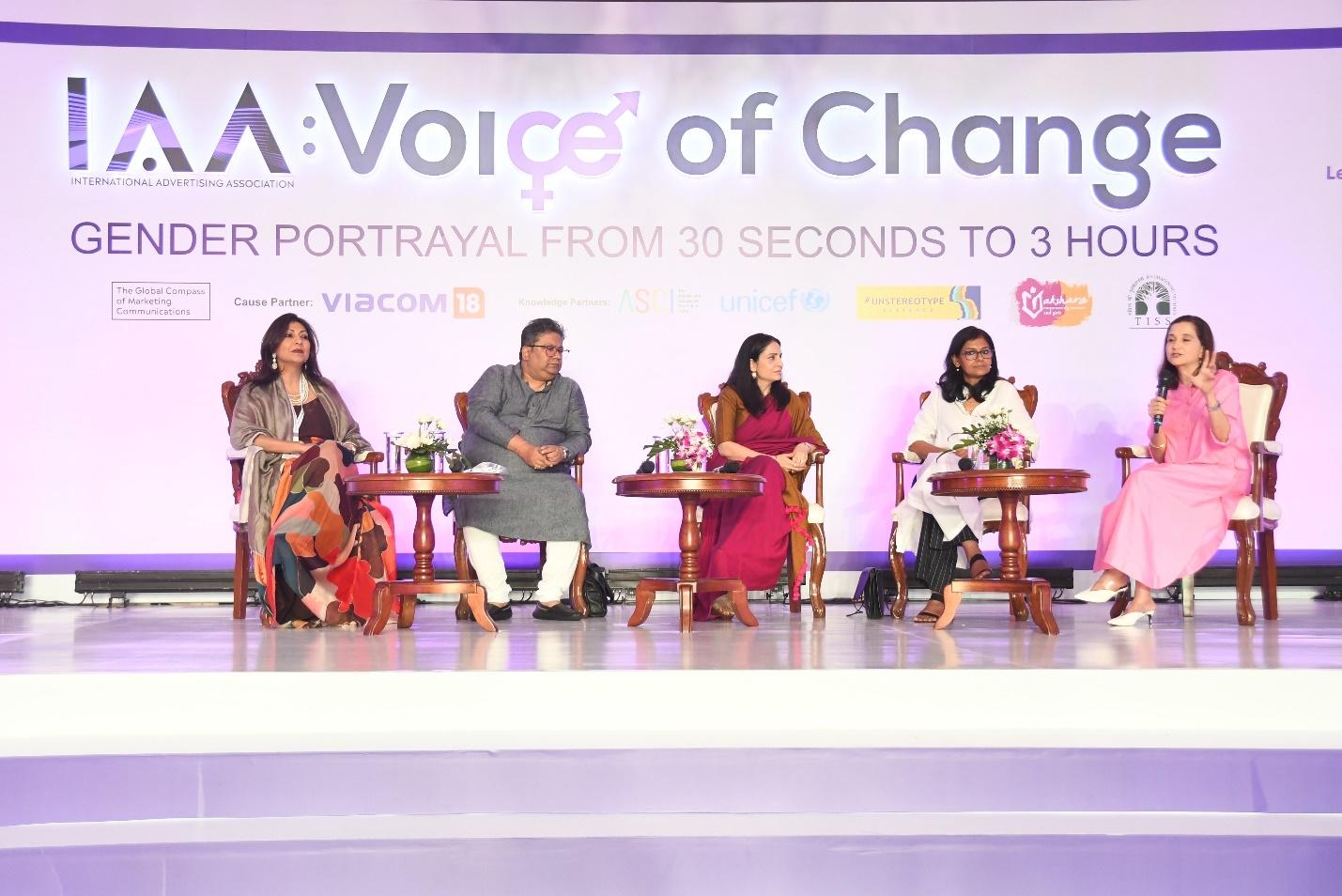 The highlight of the afternoon was a fireside chat with Vidya BalanOutstanding Actor and Unicef ​​Celebrity Advocate, where she said, “We know that advertising and all forms of media have immense potential to promote the empowerment of women and girls, but they also have the potential to harbor harmful stereotypes through unrealistic portrayals of girls and women. Sometimes creative formats also run the risk of reinforcing traditional gender roles and promoting gender discrimination in and out of homes. As a celebrated UNICEF advocate, I strive to continue advocating for gender equality that fuels the aspirations of girls and women and helps change people’s perceptions. Followed by an enriching one-on-one, popular celebrity talk show host and producer Atika Faroo, who spoke with Zainab Patel, Director of Inclusion and Diversity, Pernod Ricard, who is an actress of the change in her own right having been a lifelong advocate for trans rights. . The captivating conversations ranged from the inaccessibility of everyday opportunities to the unique stressors of a trans life. The session ended with a resounding standing ovation as Ms Patel struck a chord with everyone present. 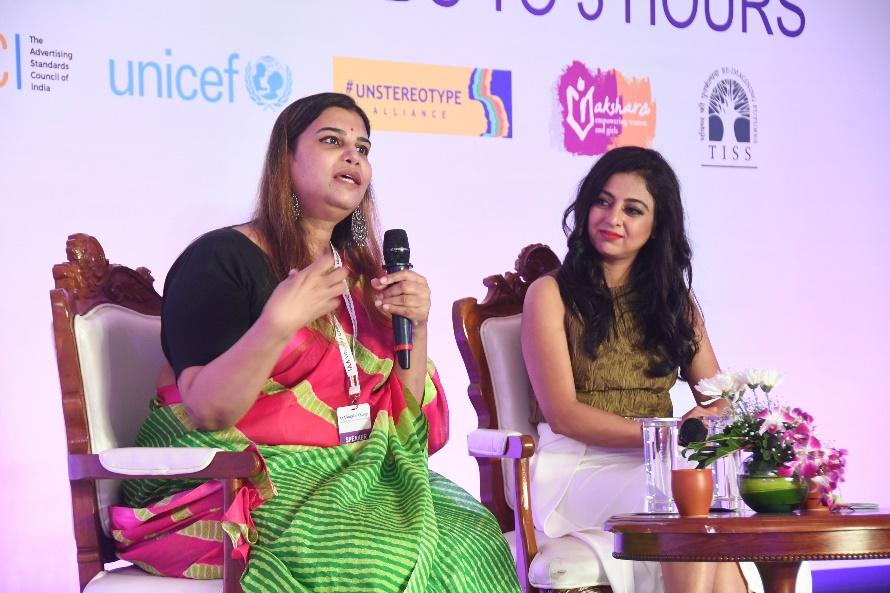 As the day of learning, stimulating insights and notable conversations drew to a close, the takeaways were an understanding of where the industry is, where the bottlenecks are and what needs to be done to achieve a truly fair and equal representation of gender in media, whether in a 30 second TVC or a 3 hour film or anything in between. It is essential that we all come together collectively to break down prejudice.

The Magician and the Wand, Marketing & Advertising News, ET BrandEquity